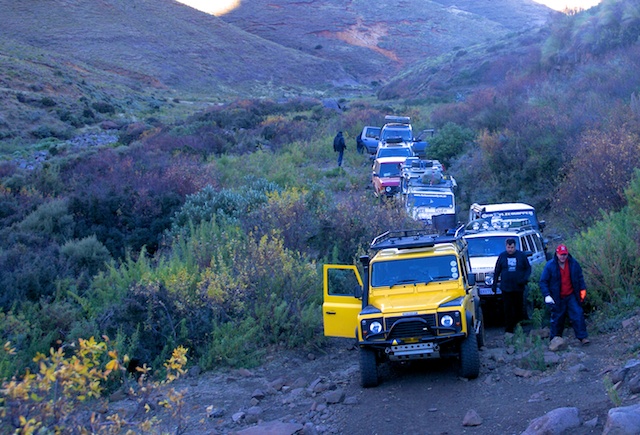 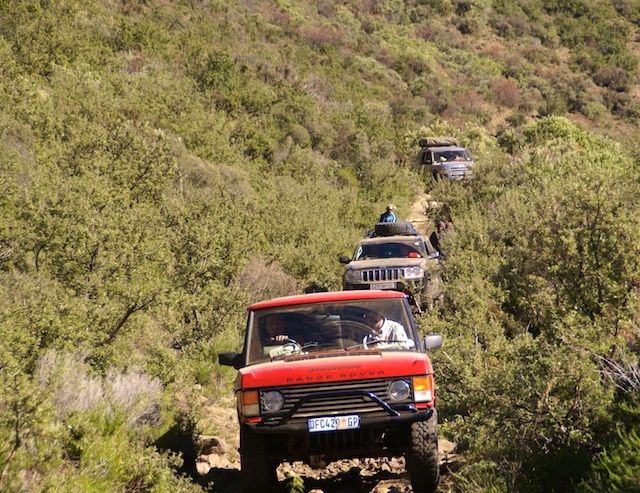 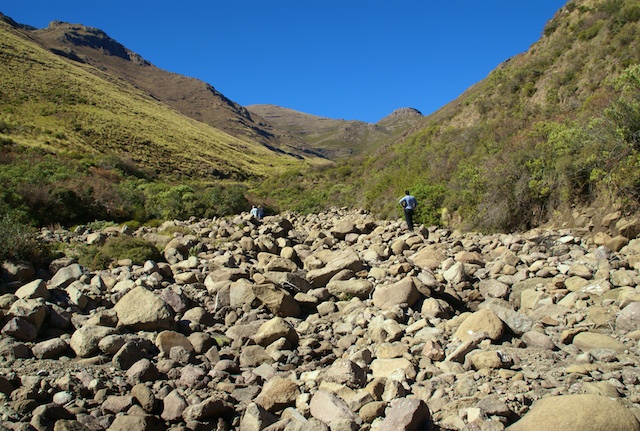 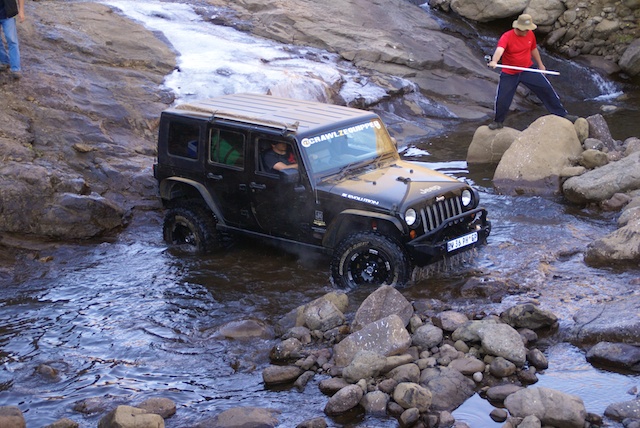 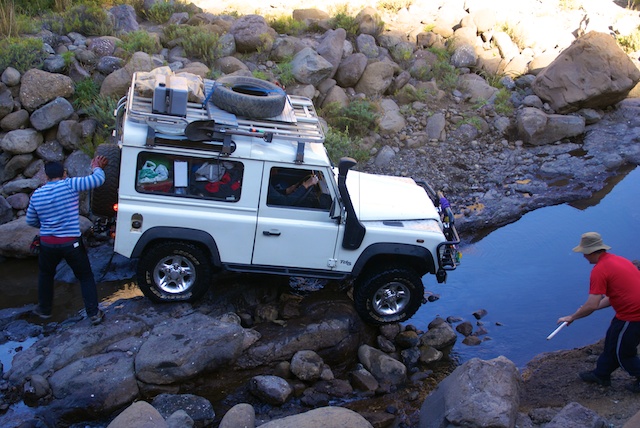 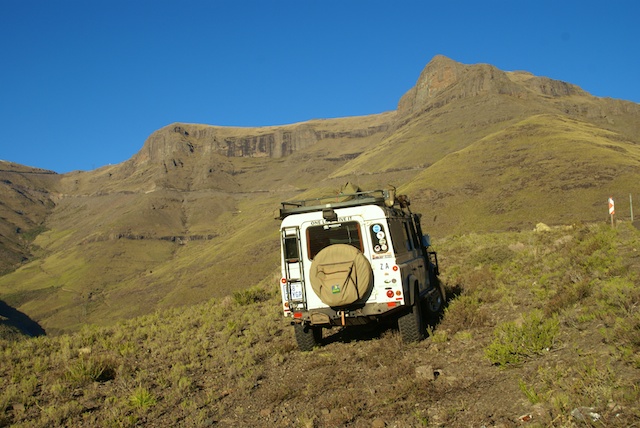 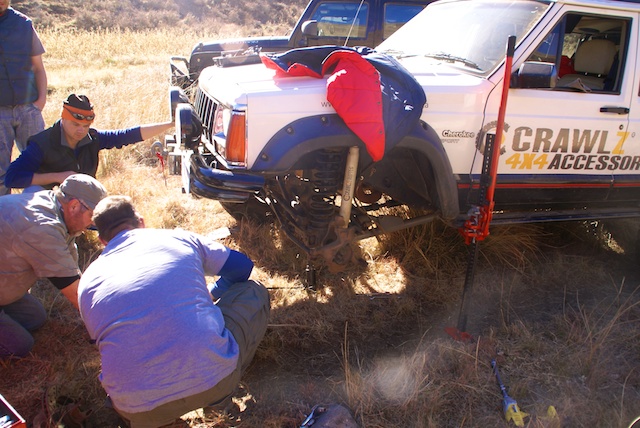 Our group of 4×4 enthusiasts got together and discussed the possibility of doing the little known about thriller of a pass called ‘Letele pass’. So after many hours of planning, organizing and more importantly prepping our vehicles we decided to tackle the infamous Letele Pass in the Lesotho mountains.
The team comprised of the following adrenalin seeking people:

Not saying that the group dynamics were a problem but the Jeep drivers were prepared to tow a couple of Land Rovers up and down some serious terrain! Certainly the oil dripping drivers thought that the over modified Jeeps would not match their standard British build 4×4’s!

The group eagerly met up early on the Friday morning near Villiers just to find one passenger (a Hilux driver) a bit late and still in bed in Johannesburg. Then the Crawlz team surprised us with ‘little gifts’ for the cold weekend ahead, flasks filled with OBS. We took a slow but steady drive towards Clarens were the rest of the team members caught up with us and we had our last proper cooked meal for the next 4 days, from here onwards a slow and brand bashing drive to the start of Letele pass took the majority of the day.

Due to other confused local travellers stopping and asking what we are doing at this place?, they replied after our answers with, “The road she is not”, “You are crazy!” “How?” We arrived after dark at the base of Letele and  we negotiated with the local shepherds for a camping spot. Our leader, Simon said we shall continue early the morning up and over this infamous Letele pass! So our first freezing night started in the middle of the Lesotho winter!

After waking to a number of grumpy old men in the freezing cold, it reached -7 degrees Celsius during the night (if only we knew what lay ahead for us), coffee and the normal breakfast was our saviour. Serious preparation started in order to tackle this mountain with all our guts! Some of the members were a bit laid back and some other was like little Jack Russells, ready to take on the unknown!

Simon did some research and the last group that has completed the trail did it in the year 2000 and they said it was plain hell! As it will be, our group decided that we know how to 4×4 and have successfully completed Baboons last year. Do not get me wrong the group is highly qualified 4×4 enthusiasts and our vehicles were all more than capable to conquer this beast.

The first major obstacle that the group had to overcome was a side slope or a frozen river. Some members used the side slope and other though that the frozen river and rocks were the best option! It was just shown by the fact that each driver knew the strengths and weaknesses of themselves and the ability of their 4×4’s, shown by the option they took!

After spending some time on the above obstacle the group decided to push on! Some rocks, ice and other mountain spirit tricks were encounter but nothing that we did not expect. Eventually one Jeep was recovered! Some Oil leakers leaked more and we came to a section that scared even our young Kingsley (aka Ben).

The road turned into one large minefield of large boulders, impassable boulders! It looked as if something larger than life took away all the soil in the world and only left rocks! The group walked, strategized and planned but to no avail! The road had one huge gaping gap, dropping almost 2 meters straight down and almost 50 meters wide filled with boulders the size of average mom’s taxis! We were not prepared for actual road building especially with the limited time we had nor without serious damage to our beloved 4×4”s!

At this stage we had to accept defeat and made the choice that we will not be able to do this impossible ‘river crossing’ to finish the rest of  the Letele pass which we still don’t know if its even passable or not! The Letele Spirits showed us that she had won! The group morale was down but then a glimmer of hope came and we decided to drive up from the other side to the exact point we had to turn around! Suddenly all the chirps and comments started and off we went to tackle it!

Our faithful Kingsley Jnr decided that as he is in Lesotho every second week, he’ll show us a nice camping spot where we can camp the night! Jnr forgot about one important fact! Winter in Lesotho is not warm and camping next to the intake of Katse dam is not the best decision! The promised ablutions etc. were not found, instead we froze! All our liquids beside the lovely OBS froze!!! It by itself is a miracle that we made it through the night! Most of the vehicles struggled to start that morning as it was -15 degrees Celsius! We packed our 4×4’s once again after defrosting ourselves and gear. Just after 10a.m the group embarked on its new quest to conquer letele pass from the other side! The other side had much more ice, rocks and water crossing! And once again we packed rocks and moved boulders and packed rocks and moved boulders…..The environment caused the team to do some bush welding on one of the Jeeps front axle and fixing some steering arms for the landy’s and doing some other repairs!

Unfortunately one of the Jeeps caught some of the Land Rover oil leaking illnesses after bumping the rear diff into a rock! And seeing that this was a new illness for a Jeep the driver and one compassionate Range Rover owner was unfortunately forced to turn around, decided to call victory to the mountain spirits!

It took us one full day to reach the base of letele pass from the other side of the mountain and forced us to set up camp next to the mountain stream right in a gorge where three kloofs met! That was our ‘windy’ night to say the least! It reached -14 degrees Celsius and taking the wind chill in consideration it easily reached -22 degrees Celsius that night!

The next morning after defrosting all our gear again the group decide that it’s a bad idea trying the pass from this side and changed our route again as we where camping at a crossroad. We decided to rather drive the kloof out using the Rampei pass since we were close to its base as well. We conquered yet another boulder bashing river crossing and continued to the point that going further would mean staying a week longer! Some serious side slopes and rock climbs had been victorious due to the group’s time constraint! And maybe if the modified Jeeps did do some more pulling on the Land Rover’s there might have been more time to finish the pass, the landys are most definitely more over landing vehicle than obstacle ruling rock climbing monsters. But with that said most of them were still stock standard, as for the Jeeps, they where heavy modified purpose built creations and where more than capable for the task. Stock standard Jeeps would most certainly have suffered even more.

In the end we had to turn around twice, not because the vehicles nor the drivers and navigators weren’t willing but the Mountain Spirits and time weren’t in our favour. We will be doing the same but just plan for enough time, bigger crowbars and generators to power electric blankets, and some more modifications to our 4×4’s!

A word of warning to all that would like to do this, Have enough time and be prepared! This is not Baboons pass and you and your team will be tested!

Written by the “Letele Crazy Group”

Graeme doesn't do mainstream, thats why he drives a Jeep KJ, wears toe shoes and shoots video on his DSLR.

Caravanning vs Chalets: The Calculations 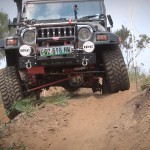 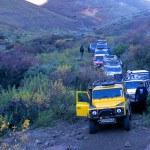 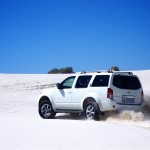 Pathfinder in the Dunes
705 views