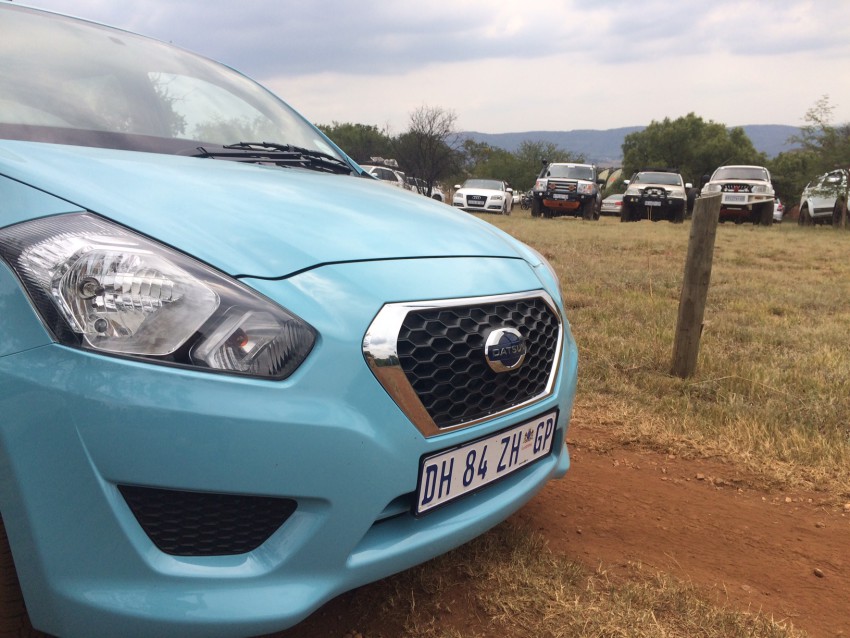 Perspective. Sometimes its really good to have some of it.

Like the other day, when we swapped the normal staple food of 4×4 for something on the complete opposite end of the scale. A Datsun GO. A Datsun GO in a coat of “sky”, as Datsun calls it.

Firstly, in case you missed the whole rebirth of Datsun bit, a brief recap. In 1986 Nissan stopped using the brand name Datsun, which had been around since 1931. In 2013 the company revived the brand as an entry-level marque, with a factory in India churning out the GO hatch. The vehicle is sold in Indonesia, India, Russia and South Africa.

Being an entry-level brand, pricing is obviously a pivotal selling point. Starting at R91 300 the GO carries its entry-level baton with pride. At that price point, competing in the sub R100 000 category there a few contenders: Chery QQ3, Geely LC, Geely MK, FAW V2 and the Tata Indica.

Of this lot the Datsun key will probably fare best when added to a group of car keys at a braai at your buddy’s house, seen from a fashionable acceptable point-of-view. 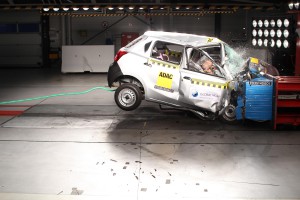 Okay, so let’s talk safety – a highly controversial issue for the GO. After a furore about the fact that the GO doesn’t get air bags and ABS brakes as standard, a Global NCAP crash test saw the GO score zero points for adult occupant protection (front seats) and two stars for child occupant protection (rear seats).

There was worse news though: The Go’s structure collapsed in the crash, and was rated as ‘unstable’. The testers concluded that it would therefor make the fitment of airbags redundant.

Now all this resulted in the Global NCAP organisation (a United Nations initiative that  works with all the various NCAP organisations all over the world to promote car safety) demanding the urgent withdrawal of the GO from all markets.

Some would argue that the GO is being made into a scapegoat in the hotly contested cheap car segment. In India the Hyundai i10, Ford Vigo, VW Polo (older generation) and Tata Nano scored zero-star adult ratings. These vehicles are all older designs, while the Datsun is obviously a new one. So it;s a little bit of that and a little bit of that. But safety remains a Datsun GO talking point.

Let’s move on to the actual driving experience – and swapping a 10-airbag SUV for a zero airbag entry-level car, tipping the scale at less than 800kg.

And I’ll start it off by stating that driving the GO is… fun. Yes, that’s right: fun. Thanks to the fact that it weighs next to nothing, the 1,2-litre three-cylinder engine’s 50 kW of power feels more like 80 kW in a typical hatch like a new VW Polo. The little engine spins around the rev counter surprisingly briskly too, and hitting the rev limiter while you get used to the way the three-pot engine goes about its business is not unusual.

Gear shifts are pretty vague, but what is cool is the fact that the gear lever is mounted in the centre console, in relative close reach of the left hand.

On the road the ride is – surprisingly – comfortable. And with the windows closed (front electric and the rear ones have a strange knob thingamabob) and the air-con blowing, open road cruising is a comfy affair, with the Datsun capable of maintaining 120km/h in top gear up most hills too.

In the corners the tiny 13-inch wheels (the tyres are 155mm wide) were clearly not intended to provide unusually high levels of grip. And there is also some body roll in the game. But overall, considering this is an entry-level hatch, the handling and ride is pretty solid and comfortable.

To the interior then, where the ‘entry-level’ theme is quite evident. The upholstery is okay but the ‘budget’ lineage is pretty obvious. The test model was the more upmarket “T” version, so it came standard with a mobile docking station. You can then connect your iPod or smartphone to the system and play your own music though the car’s sound system. This also means there is no radio – but you can always fix that with an aftermarket head unit.

There are some luxuries to be had in the more upmarket “T” model too, including electric front windows. Rear seat passengers have to make do with weird turning knob contraptions for their windows. There is also power steering, air-conditioning and an immobiliser system coupled to a central locking system. In the basic “A” model – which sells for R91K – the standard kit list is much shorter.

Which brings me to what we initially thought was a major issue with the Datsun we tested: the electronic fuel gauge was malfunctioning. We drove the GO for days on end without the read-out changing. It was only after about 200km of city slogging that one ‘bar’ finally disappeared – and we realised that the tjorrie was just not using so little fuel. The fuel tank capacity is just 35 litres, but we managed 550km before refuelling. That’s less than 7 litres/100km – about half we are used to in the 4x4s!

For the record, service intervals are pegged at 15000km and a service or maintenance plan is available at an extra cost.

Now the question beckons: what about this Datsun then, considering its price, safety record, kit, consumption and driving experience? 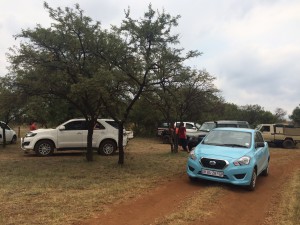 Firstly, it’s important to acknowledge that some customers have only X amount of funds to spend on a vehicle. And if that vehicle is brand new and reliable, is reasonably cool (especially amongst the post-school student generation) and runs on proverbial fumes (considering the price of fuel), then it makes perfect sense that Datsun is selling a lot of GOs. Thing is, for some customers, safety is a selling point. But on the other side of the coin some customers don’t give a hoot about airbags and ABS and whatnots.

To put this in perspective I have to put my old student cap on. Back in those days I drove a Renault 5 (with 33kW!) which was cheap to run, had zero safety kit like airbags, was reasonably fun to drive, maybe not so cool and not very reliable, and I even survived an accident in it when a fellow motorist skipped a red traffic light.

With that student cap on, and considering my meagre income at that time, a Datsun GO does make theoretical sense. And frankly, I had waaaaaaay more fun in the GO than I ever imagined I would.

However, with my today-cap on, with a family to mind about, I’d rather spend that R100K or so on a bigger and safer SUV that will offer a little bit more peace of mind if someone does skip a red traffic light again.

There is a third scenario: if you are a family man and your better half drives that safer SUV to transport the kids and you drive your fuel-guzzling 4×4, then the Datsun offers a compelling option as a week-day city runabout, to and from the office. You can’t beat the consumption and I’d much rather manage traffic in GO than from the seat of a motorcycle. And the GO is definitely, without any doubt, plenty safer than a motorcycle. You’ll just definitely have to go for the more upmarket GO then – which retails for R102 000.

Perspective – a Datsun GO certainly can provide that.

To airbag, or not to airbag – what do you think?

When all is said and done, we do reckon Datsun should include airbags and ABS brakes as standard. However, this will obviously cause an increase in the asking price, defeating the whole ‘budget entry-level’ mission. What do you think? Does Average Joe really care so much about airbags and ABS and safety? Or should Datsun get some heat for not including these items as standard?