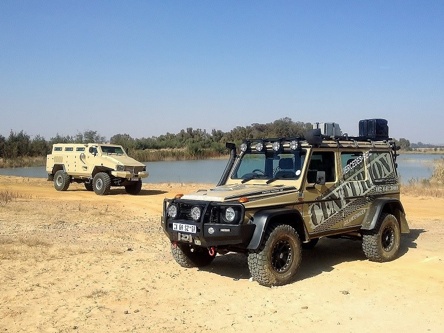 A big Mercedes-Benz Gelandewagen with a 35-inch Arctic Truck conversion tackles a very tough 4×4 trail in Limpopo to check if it’s really, really worth almost R1,3-million. And then the Benz also takes on a massive Panzer KF47 armoured 4×4 at Rhino Park, east of Pretoria, in a cross-country 4×4 challenge.

Also on the menu is the 4×4 Kungwini 4×4 trail, near Bronkhorstspruit – where we, well, we got better acquainted with Kungwini’s Land Cruiser pick-up. On the other end of the Toyota 4×4 scale we look at a Toyota Hilux with a 36-inch conversion, courtesy of Gary Swemmer from the 4WD Truckin’ Company. As far as big-wheeled bakkies go, this is one of the best we’ve seen. Our Jeep Wrangler project vehicle is visiting Rob Green Motorsport in Randburg for a few extra horses, and we find out how much power the standard engine really delivers.